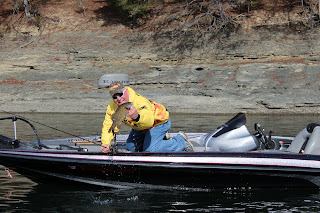 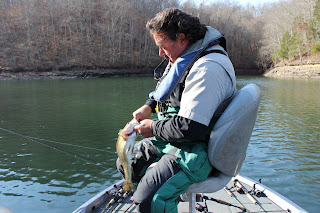 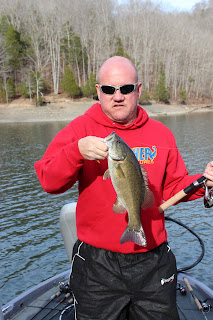 If you like to tangle with big bronzebacks and you are not afraid of the cold, winter is a good time to be on Legendary Dale Hollow Lake.

I was there on Thursday for a fishing trip/photo shoot. It is what we in the business call a working trip, but I won't pretend like there was a lot of work involved. Kentucky Outdoors magazine's General manager Doug Moutardier and I went down Tueday night and hit the water Wednesday to fish the float 'n' fly, one of the best techniques for wintertime smallies.

The float 'n' fly is rigged using a 9 or 10 foot spinning rod and reel combination, spooled with Berkley Fireline. Attach a three-way swivel, a 12-15 foot fluorocarbon leader and a 1/16 hair jig. On the third arm of the swivel attach a Bob's Bobber and you are ready.

The fishing was pretty good and according to Headrick will improve as the temperatures continue to drop this winter.

"The colder it gets, the better the float 'n' fly works," Headrick said.

The day was a success. Fish were caught, nobody got cold and caught hypothermia (high was 65 degrees that day) and I managed to sort through 355 photos when I got back.

If you would like a guided trip on Dale Hollow you can call Bobby Gentry at (270)427-0419. For more information on the float 'n' fly and to order the needed tackle you can visit punisherlures.com.
Posted by Tim Tipton at 10:34 PM No comments:

An Embarrassment of Riches

The seasons are changing in the Bluegrass State. Cooler night time temperatures are the norm now. Kentucky’s archery deer and turkey seasons are in full swing. The first official day of autumn is less than a week away.

Fall is my favorite time of the year. The changing colors of the leaves stir mixed emotions. October is my absolute favorite month but also one of my most confusing. Bow season is in full swing and I love to be in the woods with my longbow and cedar shafted arrows, chasing whitetails and turkey. I go as often as time allows, which is quite a bit considering my office is in my house and I am my own boss.

October is also catch and release trout season in 14 streams across the Commonwealth. The chance to chase rainbow and brown trout is difficult for me to resist. The 4 weight fly rod in its case in the corner beckons me often. I can wake before sunrise drink a cup of coffee and both the longbow and the fly rod both call out to me. I am sure to disappoint one of them.

On occasion I take them both. One of my favorite trips is in the Clifty Wilderness section of the Red River Gorge. Sleeping in a tent, into the woods with the bow before daylight pursuing the game. Back to camp for lunch where I string up the fly rod and cast a dry fly with a nymph on a dropper trying to entice the streams trout. Back to the woods in the evening, hunting till dark. It truly is an embarrassment of riches.
Posted by Tim Tipton at 10:39 AM No comments:

The greatest bass angler in the world 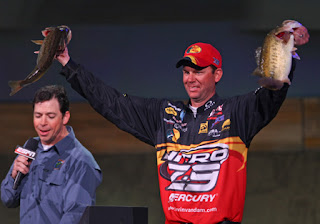 While I am not a tournament angler, I must admit that part of the perks of being an outdoor writer involve fishing and riding along with some of the best bass anglers on the planet. Having followed the professional tournament circuits for years and written articles with tournament anglers I have come to appreciate what these guys do.

I will now make a statement that should not shock anyone. The best bass angler on the planet is not a good ole southern boy, but is a well spoken man from Michigan. In my mind Kevin VanDam cemented that title with his win in this weekend’s Bassmaster Classic on Alabama’s Lay Lake.

For those keeping score, that is KVD’s third Classic win to go along with his five BASS Angler of the year titles. Only the legendary Rick Clunn has more Classic wins (four) and only Roland Martin has more AOY titles (nine). VanDam has a chance to storm past both.

His focus and mental toughness rival that of greats in other sports, such as Michael Jordan and Tiger Woods. He has the ability to intimidate his fellow anglers, particularly when he is at or near the top of the leader board. When talking about this mental approach, longtime outdoor scribe Alan Clemons compared him to the late NASCAR legend Dale Earnhardt on the Fishing Wire (www.fishingwire.com) this morning.

“I've watched both, Earnhardt and VanDam, and they're linked by several similarities including relentless determination, fierce competitiveness, uncanny skills and the ability to create doubt,” Clemons said. “Doubt in the minds of their competitors. Doubt that even their best effort on the best days might not be good enough, and they wonder how to throw up roadblocks.”

High praise for the king of bass tournament fishing.

To read more about KVD’s win you can go to the official Bassmaster web site at : http://sports.espn.go.com/outdoors/bassmaster/index.
Posted by Tim Tipton at 1:38 PM No comments:

Will you participate in Kentucky's Spring turkey season in 2010?

Tim Tipton
Tim Tipton has been a freelance outdoor writer since 1992 His magazine work has been featured in many national and regional publications including Bassmaster, In-Fisherman, FLW Outdoors, Fishing Facts, Kentucky Game & Fish, Kentucky Afield, Tennessee Valley Outdoors and many others. Tim is currently a field reporter for Kentucky Outdoors, contributing editor to Midwest Outdoors and staff writer for Bass Angler Magazine. He has been a member of the Bassmaster Classic Press Corps and Red Man All-American Press Corps. He is currently a member of the Southeast Outdoor Press Association and the Kentucky Outdoor Press Association.